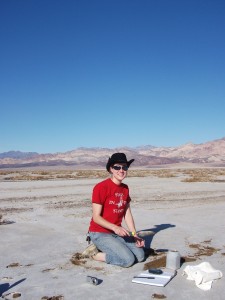 A PhD candidate in the ecology and evolution division of the Biology department at Wesleyan University, Sarah studies the diversification of members of the Bacillus subtilis-licheniformis clade along a geochemical gradient in Death Valley, California.  Her preliminary results have identified ecotypes (closely related, ecologically distinct groups) that differ in their associations with soil copper, salinity, and boron content.

Sarah received her BSc in 2008 from Fairfield University, where she did research with Drs Jen Klug and Tod Osier growing the toxin-producing algae Microcystis aeruginosa.

Through Farfield University she was inducted into Sigma Xi, the

Scientific Research Society.  During the summer before her senior year Sarah was accepted into the NSF sponsored Research Experience for Undergraduates at the University of South Carolina and worked in Dr. Richard Long’s lab.  She contributed to the work for the publication “Production and enzymatic hydrolysis of carbohydrates in intertidal sediment” in Aquatic Microbial Ecology. 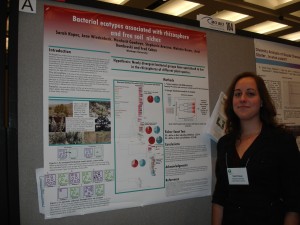 Sarah was awarded a CT Space Grant Consortium Graduate Fellowship for 2011, in the amount of $20,000. She was also granted travel awards for the 2010 Astrobiology Science Conference and the 2011 meeting for the American Society for Microbiology.

Contributions to the larger scientific community

Since 2008, Sarah has mentored 20+ undergraduate students in laboratory research, including bench work and bioinformatics and various statistical analyses. She holds weekly group meetings to discuss lab work. The Cohan lab is proud to maintain the largest number of undergraduate researchers in the Biology Department.