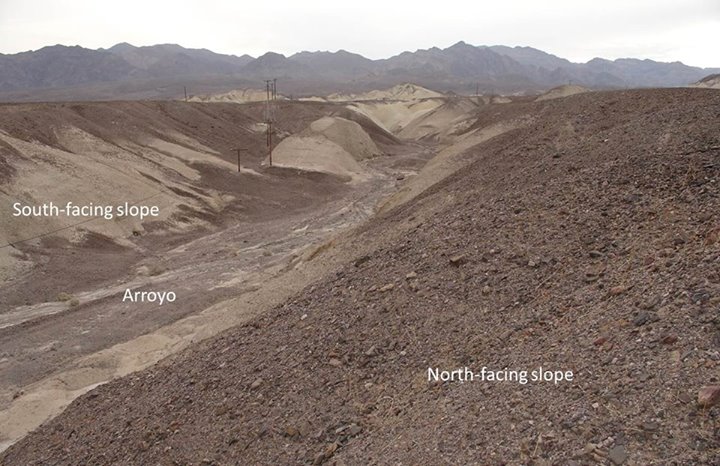 We’re Alexa Boesel and Fred Cohan with our next posting of Invisible Life. Today’s posting comes out of Fred’s research in Death Valley.

Fred and his students and collaborators were interested in how environmental differences that seem subtle to us might have a huge impact on the bacteria that can grow there. Their study site was a west-running canyon near Furnace Creek, with a north-facing slope, a south-facing slope, and an arroyo. The physical environments of the two sides of the canyon were similar in every way—same climate, same geology, and almost the same sunshine but not quite. While there is virtually no shade anywhere, the south-facing slope experiences intensified solar exposure because it faces toward the sun. Slope direction particularly affected the plants—the two slopes barely overlapped in the plant species they contained. But what of the bacteria?

Fred’s group sampled the near-surface soil on each slope for close relatives of Bacillus subtilis, a bacterial species that is extremely resistant to the stresses of Death Valley living. Based on DNA sequences of several genes, the team discovered many populations within B. subtilis and within other Bacillus species. It turned out that some populations were found mostly on one slope while others were found mostly on the other.

What might enable very close relatives to differ in adaptations to the two slopes? Fred and his team found that the fatty acids of the bacteria’s membranes had evolved. The north-facing slope had more cool-adapting fatty acids, which tended to be more flexible at the cooler temperatures on that slope. Warm-adapting fatty acids, on the other hand, maintained their rigidity in warmer temperatures, and were more often found in bacterial populations of the south-facing slope!

How amazing that bacteria can be so finely tuned for seemingly indistinguishable environments?