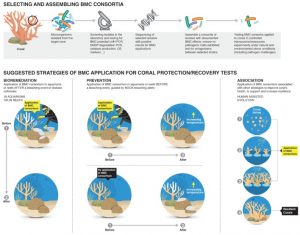 What do you do when you’re having digestive issues? Assuming of course, that these issues are ongoing and not simply the result of some questionable fast food you ate last night, you might consider taking probiotics. Probiotics are beneficial microorganisms that, when ingested by humans, can help promote gut health.

It would appear that corals are experiencing the equivalent of a colossal stomach-ache. Most coral species live in symbiosis with dinoflagellate algae of the genus Symbiodinium. Bleaching occurs when the Symbiodinium population is killed and/or expelled from a section of reef, resulting in a loss of color. As global water temperatures rise, large stretches of coral reef are experiencing bleaching. Recently, the Great Barrier Reef made waves due to a massive bleaching event for the second year in a row, resulting in roughly 900 miles of bleached coral. Beyond bleaching, corals are also susceptible to a variety of infectious diseases, usually identified by a change in color, including black band disease, white band disease, yellow band disease, and white pox.

What might mitigate the corals’ susceptibility to pathogens? One possibility takes into account that the algal symbiont Symbiodinium is not the only beneficial microbe associated with coral. A variety of fungi, bacteria, archaea, and viruses help to maintain a healthy relationship between corals and their algal partners. When the balance of these organisms gets out of whack, corals get sick, much like humans do when we have the wrong balance of bacteria in our gut. Perhaps we should give them some probiotics…

Dysbiosis, or an imbalance in the microbiome, has been increasingly investigated as a cause of disease in both humans and corals. In humans, recent studies have indicated a link between dysbiosis in the gut and auto-immune diseases such as diabetes, rheumatoid arthritis, and multiple sclerosis, as well as inflammatory diseases like obesity and vaginosis, and some cancers and mental disorders. The connection between dysbiosis and these diseases is most likely a result of the microbiome’s role in regulating the immune system.

Similarly, in corals the composition of the microbial community is likely to play a role in susceptibility to diseases.

But what exactly is a “good” microbiome? That is, which microbes promote health? In humans, it is often difficult to answer this question since bacterial communities in the gut are dynamic and known to vary depending on ethnicity, age, diet, exposure to certain chemicals, and genetics. Some beneficial microbes have been identified (for example, an increase in the abundance of Akkermansia muciniphila has been shown to improve an individual’s metabolic profile and to reverse obesity) but much work remains to be done.

As in humans, the composition of the coral microbiome varies greatly, making BMC difficult to identify. Depending on coral species, season, life stage, and environmental conditions, healthy corals may host different combinations of microorganisms. However, if BMC can be identified, they might be manipulated in order to facilitate coral fitness and defend against changing environmental conditions. That is, those corals that are better adapted to specific environmental conditions (such as higher water temperatures) might be able to “donate” some of the BMC that have helped them to survive and these BMC could then be artificially applied, like probiotics, to less well-adapted corals.

So how exactly do BMC help corals? These microorganisms can assist with carbon uptake, nitrogen and sulphur cycling, and protection against ultraviolet radiation, among other physiological processes. BMC bacteria have been observed to act as cues to facilitate settlement of coral larvae. They are also involved in Quorum Sensing (QS)—a system of bacterial cell-to-cell chemical signaling—and defense against pathogens.

Research on beneficial microorganisms has the potential to be very useful in managing disease in humans and corals alike. BMCs could be instrumental in preventing further coral death and/or restoring partially bleached corals. As the diagram shows, the first step would be to determine whether it is more effective to apply BMC prior to bleaching events, as a preventative measure, or afterwards, as a restorative measure. Likewise, identification of beneficial microorganisms for humans (BMH anyone?) might be advantageous in preventing and remedying diseases ranging from diabetes to cancer.