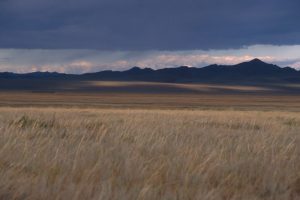 The human body operates within tightly controlled parameters. Normal body temperature is 36.5–37.5 °C. A degree departure from that either way is a fever or hypothermia. Two more degrees above normal is a life-threatening coma. Feedback loops, chains of sensors and signals in the body, regulate this delicate balance. The hypothalamus, located in the brain, serves as the control center for body temperature integrating signals coming in from the body to adjust the temperature back to normal, forming a negative feedback loop. Too hot? The hypothalamus signals for sweating and increased blood vessel dilation to dissipate heat.

The earth is like a human body in many ways: feedback loops, both negative and positive influence the environment and seemingly slight deviations from normal temperature have catastrophic consequences. And right now, the Earth has a human-induced fever. Except that no negative feedback loop is powerful enough to return the Earth’s temperature to where it should be. In fact, positive feedback loops, systems that push the environment further and further from normal, are at work.

Take Arctic ice: Usually, ice reflects much of the sunlight that hits it back into space. But as the Earth warms, the melting ice exposes darker, more heat-absorbent, land and water, pushing the Earth’s temperature still higher. Or look to drought in the Amazon, where the decomposition or combustion of trees due to lack of water may turn the Amazon from a CO2 sink to a major CO2source. And as atmospheric CO2 rises, so will temperatures and extreme drought, creating an escalating cycle of warming, drought and ecological destruction (1).

On the Eurasian steppe, a vast, semi-arid grassland stretching from Eastern Europe to Mongolia, researchers recently identified yet another potential positive feedback loop involved in carbon release, one with very small players and very big consequences (2, 3). The soil contains more carbon than the grasses rooted in it or the air blowing through those grasses above. Part of the soil is recalcitrant organic matter, meaning that only a small subset of microbes can break it down over a long period of time. As the soil temperatures rises, the composition and activity of microbial communities within it also shift, leading to changes in what can be degraded (3).

For five years, Ximei Zhang, Eric R. Johnston, Linghao Li, Konstantinos Konstantinidis, and Xingguo Han simulated the potential effects of global warming by watering some plots of grassland to mimic a 30% annual increase in precipitation, heating others to raise the soil temperature 1.1 °C, and combining the treatments on the third set. While these changes in precipitation and temperature may appear minor, they caused major changes in plant and bacterial growth and composition (3).

The total size of the microbial population increased, as did the activity of certain catabolic pathways. The activity of genes involved in the degradation of lignin, a recalcitrant compound found in cell walls of plants, increased in abundance by 22.3% in the plots that were watered and by 18.3% in the plots that were both watered and heated. Breaking down more lignin and other recalcitrant organic matter in the soil unlocks pools of carbon, eventually releasing that carbon into the atmosphere. In the plots modeling a temperature increase of 1.1 °C, soil organic matter (SOM) content, usually a stable quantity in soil, decreased by 13%. However, in the plots that were both warmed and watered, SOM content only decreased by 4.9% and plant growth increased, helping to balance the output of carbon from the soil with carbon uptake by the grass (3). But these results are unnerving given that scientists predict that as global temperatures increase, dry areas, like the steppe, will get drier and precipitation patterns become more erratic and severe (4).

From studying the human body, we know that a few degrees’ shift in temperature is dangerous, even deadly. This study on the soil and microbes of the steppe shows that the Earth is no different, except that instead of a hypothalamus running a negative feedback loop to restore balance, changes in the Earth’s temperature largely create positive feedback loops. Just as in the Amazon, where global warming-induced drought reduces the rain forest’s ability to act as a carbon sink, an increase of 1.1 °C has the potential to transform the Eurasian steppe into a net source of carbon, fueling a vicious cycle of further global warming. The Earth has a fever and it is only rising. The time has come to reduce human inputs to that feedback loop, before the delicate balance shifts too far.