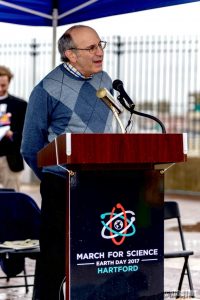 The problem is that we’re inclined to ignore the inconvenient truths from science about global warming—we seem quite willing to take a chance on hot, deadly summers or rising sea levels. Worrying about global warming is, to many, like worrying about heart disease. Although heart disease and global warming are both serious threats to our well-being, we don’t fuss much about either. Threats of heart disease don’t motivate us to eat or exercise better any more than threats of flooding seas motivate us to stave off global warming. On the other hand, there is a health issue we all worry about, and I would say we are all obsessive about—and that’s infectious disease. If someone with a cough or a sneeze walks by, we go nuts! I believe our compulsive fears of infectious disease will be what reconnect us to science and protecting the environment. This is because science is showing that global warming and our other environmental impacts on animals are bringing nasty pathogens to us. We should not think about global warming like it’s heart disease, but rather more like it’s the Plague.

Here’s what science tells us about the impacts of global warming on infectious diseases. Vectors of tropical diseases are moving north and bringing their diseases with them. For example, the disfiguring disease Leishmaniasis has already migrated from Mexico through Texas and is now in Oklahoma. This tropical parasite is now in the American Heartland! Also, diseases carried by tropical mosquitoes are moving north. Zika is already in South Florida and will move up the coast. Likewise, science has made a strong case that Malaria, Chikungunya, and Dengue will eventually move up the coast with global warming.

Beyond global warming, science has shown that all kinds of our environmental impacts on animals are bringing us infectious disease. Through its effects on ticks and mosquitoes, deforestation is causing Lyme Disease and West Nile Virus in the US, and in West Africa deforestation has brought bats closer to villages and caused the most recent outbreak of Ebola. Science has made a strong case that bushmeat hunting in Africa brought HIV to humanity about a century ago, and predicts that bushmeat hunting is poised to bring us other pandemics.

Science is showing that our environmental impacts are not just making us hotter or killing wild animals. Each way we disturb the Earth’s wild creatures comes back to kill us through deadly pathogens. We might be willing to ignore all the other ways that environmental damage threatens human health and prosperity, but I believe that our fears of pathogens will direct our attention to environmental science, and will help us mitigate our damage to the planet.

We need science to understand our present impacts on the environment, to predict our future impacts, to avoid the worst outcomes, and to mitigate the unavoidable. We certainly can’t afford to let the government shut down scientific research, or to stifle communication about human impacts on the environment, or especially, to discourage young people from entering science. I implore you to support science in any way you can—by fostering science education in the public schools, by demanding that the federal government support scientific research, and by persuading your friends and neighbors that science is necessary for our health and prosperity.