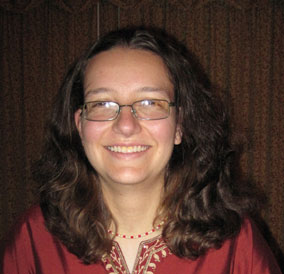 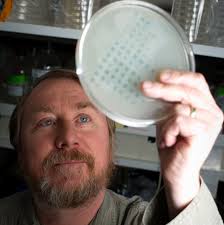 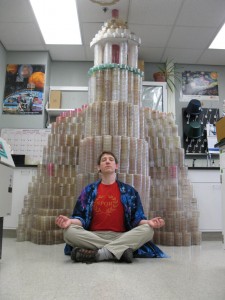 Here is one more well-crafted and insightful piece of work from Rich Lenski’s lab, with a twist on the origins and coexistence of bacterial species.

As the PLoS ONE editor for this piece, I found Turner et al.’s “Replaying Evolution” piece a well-crafted study aimed to discover why two long-coexisting “ecotypes” ceased to coexist. (I’ll define ecotypes for now as ecologically distinct populations that can coexist.) In their long-term experiments on laboratory evolution of E. coli, the Lenski group had previously discovered that after 31,000 generations of evolution, a new ecotype emerged with the ability to utilize citrate, a carbon source previously ignored by the evolving community. They found that the new citrate-positive ecotype increased to a very high frequency, while coexisting with the original citrate-minus ecotype, now in the minority. Mysteriously, the citrate-minus population went extinct after 10,000 generations of coexistence. The authors carefully ruled out any kind of adaptive improvement in the surviving population that may have driven the other population to extinction. Moreover, they also ruled out a demographic cause of extinction. That is, the population sizes were too high for one of the populations to have randomly gone extinct. They concluded that some unidentified, one-time, random environmental change (maybe soap suds?) was most likely responsible for the demise of the citrate-minus ecotype. I saw this paper as a model for investigating the causes behind an extinction event in laboratory evolution, and I was glad to be a part of its publication in PLoS ONE.

I was especially intrigued for what the results of this paper tell us about speciation theory (a point not pursued by the authors). Much has been found out recently about how easy it is for speciation to occur in bacteria, but little has been discussed about how difficult it is for newly divergent, ecologically distinct lineages to coexist indefinitely into the future. Certainly, to make it into the future, any newly divergent, ecologically distinct ecotypes must be ecologically distinct enough to be able to coexist indefinitely across the habitats where they occur now. But the Turner et al. study alerts us that in addition, the ecotypes must be different enough such that when their environments change, they must always be able to find a way to partition resources. Indefinite coexistence requires that as the world changes, perhaps with unforeseen climate changes or invasions of pathogens or competitors, the newly divergent lineages must always be partitioning their resources. An interesting lesson from this paper!