The biological species concept has dominated thinking about the origin of species since the 1940s, owing to the influential work of Ernst Mayr. The central idea behind the BSC is that recurrent recombination prevents populations from diverging into new species that are irreversibly separate; therefore, genetic exchange between populations must be severely reduced before they can speciate. However, in recent decades many zoologists, botanists, and microbiologists have questioned whether sexual isolation is really a milestone toward permanent divergence. In models of “ecological speciation,” populations can diverge into ecologically distinct populations without the benefit of sexual isolation or geographical isolation. J.B.S. Haldane long ago created the theoretical underpinning of ecological speciation—natural selection (s) against niche-specifying genes introduced from other populations at a low rate (m) can keep the foreign genes at negligible frequencies (m/s). Indeed, evidence is mounting from the animal and plant worlds that adjacent populations with little sexual isolation can diverge ecologically into the indefinite future—all it takes is a modest fidelity to habitat such that the diverging populations show reduced genetic exchange. A fortiori, in the case of bacteria and archaea, which recombine at an extremely low rate around that of mutation, recombination is not expected to hinder ecological divergence among populations.

Yet various research groups have claimed experimental evidence that the biological species concept applies to bacteria and archaea. For example, Rachel Whitaker and co-workers have argued that ecological diversification in hot spring Sulfolobus is possibly only when lineages have lost the ability to recombine frequently. They found that two coexisting lineages have considerable sexual isolation between them and that they have diverged ecologically, while the cells within each lineage showed no sexual isolation. Their conclusion was that the ecological divergence between the two lineages was possible only because they had lost the ability to recombine frequently. However, these researchers did not consider whether there may have been ecological diversification within each major lineage, in spite of the much higher recombination rates occurring within each group. 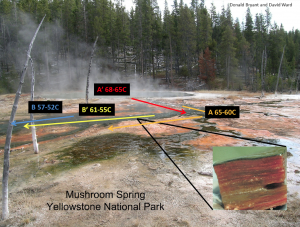 In our recent paper in Frontiers in Microbiology, we sought to address the role of sexual isolation in diversification of hot spring Synechococcus, a model system developed over decades by my colleague David Ward and his students and coworkers. In Melanie Melendrez et al., we found considerable sexual isolation between two major lineages that are vastly distinct in their preferred temperatures. As in the Sulfolobus paper, we found recombination to occur much more frequently within each lineage than between them. Where our paper deviates from the Sulfolobus work, however, is that we sought ecological diversification within each lineage, and we discovered many ecologically distinct populations (ecotypes) that had diversified by optimal temperature and depth in the hot spring mat. In spite of the higher recombination rates within lineages, many ecologically distinct populations (ecotypes) were identifiable as sequence clusters based on one or several genes. We argued that extremely close relatives of Synechococcus have been able to form species-like populations without sexual isolation.

We predict, more generally, that other prokaryotes will be found to diversify without sexual isolation when workers look for evidence of ecologically distinct, species-like populations among extremely close relatives. The theory of Haldane is very clear that we should not expect the low-frequency recombination in prokaryotes to prevent speciation.