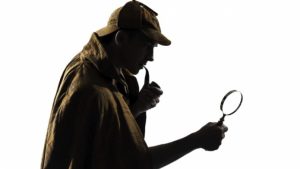 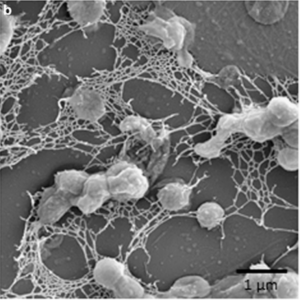 A case of concealed identity. True form unearthed, hiding in plain sight. A complicated backstory revealed. In short, all the trappings of a good Sherlock Holmes story. This is not a fictional tale written by Sir Arthur Conan Doyle, but one written by evolution and adaptation. The players are not detectives and swindlers of London, but bacteria.

In the human version of “A Case of Identity,” Holmes discovers that one person, James Windibank, is masquerading as two people in a convoluted attempt to steal his step-daughter’s inheritance. The bacterial familial drama takes the human story and inverts it. Instead of two people being one, one phylum has hidden two.

Microbiologists formerly designated the focus of our story, the strain L21-Fru-ABt, to a subdivision of the phylum Verrucomicrobia. But recent research has uncovered the true identity of this strain as part of a separate and novel phylum, Kiritimatiellaeota (2). The unmasked characteristics of these bacterial players is intriguing, but as with the mistaken identities in Holmes’ narrative, this discovery also provides interesting study of how to determine identity.

How did Mr. Windibank dupe his own stepdaughter? How is this phylum distinct from Verrucomicrobia and how has it coexisted with its many neighbors for what appears to be a very long time?

Like in any good detective story, the scene of the crime, or in this case, the home of L21-Fru-ABt, merits scrutiny. L21-Fru-ABt lives in a lake in the Republic of Kiribati, an island nation on the equator, halfway between Australia and Hawaii and made up of 33 coral atolls (3).

Lake 21 is located on the atoll formerly known as Christmas Island. The lake contains hypersaline microbial mats, which are highly phylogenetically diverse and stratified, stuck together by extracellular polymeric substances, polymers made up of polysaccharides and lipids. Various phyla call each layer of the mat home. The first three layers comprise the photo-oxic zone, dominated by the phyla Bacteroidetes, Cyanobacteria, and Alphaproteobacteria. Below that zone, the transition zone begins. While oxygen and light diminish here, the overall bacterial diversity increases by 1.4 times (4). The phyla Spirochaetes and Deltaproteobacteria also become more common as the oxygen levels decrease. Even deeper in the mat lies the suboxic zone, home to a wider range of phyla, each carving out a niche for itself. And here, lurking amidst phyla such as Deltaproteobacteria, Spirochaetes, Gammaproteobacteria, Planctomycetes, Nitrospirae, Firmicutes, and Deferribacteres, lives L21-Fru-ABt (4).

L21-Fru-ABt’s position in the mat is a key and telling clue as to the distinction between it and its former alias, Verrucomicrobia.  The other subdivisions of Verrucomicrobia live in aerobic habitats, such as soil, freshwater, and marine environments. In contrast, L21-Fru-ABt and other closely related strains now recognized as part of Kiritimatiellaeota were isolated from anoxic environments (2). Life in an anoxic habitat requires a very different metabolism than one suited to oxygen, such as the fermentative metabolism of L21-Fru-ABt.

In an anoxic habitat like L21-Fru-ABt’s home, a fermentative metabolism is nothing special, but L21-Fru-ABt goes about this common process in an unusual way, another clue that it belongs in a phylum of its own. Verrucomicrobia and Lentisphaerae, the phyla most closely related to Kiritimatiellaeota, use pyruvate kinase to form two moles of ATP per mole glucose.  Members of Kiritimatiellaeota take a different, and much rarer approach, using pyruvate phosphate dikinase as a catalyst, yielding five moles ATP per mole glucose instead. This additional ATP may give members of Kiritimatiellaeota an edge, or at least allow them to use resources differently than their many neighbors. Kiritimatiellaeota also use an electrochemical gradient to generate ATP. Usually, this type of gradient uses protons (H+) as the coupling ion, but Kiritimatiellaeota use sodium instead (2). This pathway requires a special ATPase, and, in extreme conditions like the hypersaline lake where Kiritimatiellaeota lives, use of sodium as a coupling ion could have a slight energetic advantage (5).  While these differences in resource utilization and habitat are inherently interesting, they also hold clues as to how Kiritimatiellaeota has coexisted with other lineages for eons.

Coexistence and gradual divergence give rise to ecological district bacterial strains and eventually to phyla. While the differences between phyla can be studied ecologically, genetic analysis also provides a formal, phylogenetic method of defining phyla. Phylogenetic evidence that L21-Fru-ABt belongs in a separate phylum from Verrucomicrobia comes from genetic parameters by P. Yarmaz and colleagues, who proposed that the distinction between phyla comes down to percentages of identical nucleotides in the universal 16S rRNA gene. Using 16S rRNA gene sequence from the Living Tree Project, the authors created sequence identity thresholds based off the sequence identity of defined taxonomic groups (6). The threshold percent of shared sequence for a phylum is 75%, placing the identified strains of Kiritimatiellaeota, including L21-Fru-ABt, which have a median shared sequence identity of 82.7%, comfortably in the same phylum (6). The species in Kiritimatiellaeota are also clearly in a different phylum than Verrucomicrobia because their 16S rRNA genes are less than 75% identical. Case closed, Sherlock? Not quite.

Kiritimatiellaeota represents a rare intersection of bacterial characteristics and has the metabolic and genetic traits of a distinct phylum, but does its distinctive metabolism require something structural,  something so ingrained in its physiology and ecology that no other phyla could obtain or utilize it? A possibile answers lies in investigating the relationship between Kiritimatiellaeota, and its upstairs neighbor, Cyanobacteria. Cyanobacteria produce the sulfated exopolysaccharides consumed by members of Kiritimatiellaeota, showing that Kiritimatiellaeota’s metabolism is part of a complex energy web in the mat.  Perhaps the pyruvate phosphate dikinase used in metabolism of these glycopolymers requires structural aspects of the membrane to function or specialized transport structures to shuttle them across. Or perhaps the delicate net of extracellular polymeric substances  Kiritimatiellaeota forms from the breakdown of sulfated exopolysaccharides plays a central role in its function and ecology (2).

Designating L21-Fru-ABt to Kiritimatiellaeota solves the mystery of its identity but raises the larger question of what it means to be a phylum and how Kiritimatiellaeota fits this definition. Commonly, members of one bacterial phyla share unifying architectural and ecological traits unique to that group (7). These defining structural characteristics allow different phyla to live in specific environments and use resources in a unique way, indefinitely coexisting with other phyla. Firmicutes have a distinctive multilayered cell wall that allows them to survive drought and rewetting. Planctomycetes have a stalk that holds them above sediment to catch nutrients drifting by. Spirochaetes have a unique spiral shape and use periplasmic flagella to move (8).

Bacteria can exchange genetic information through horizontal gene transfer and plasmids, but only relatively short segments of DNA can move this way. Complex architectural elements cannot be acquired through HGT because not only is the genetic information needed for these structures is too complex for transfer on small pieces of DNA, but also because an architectural adaptation that is advantageous for one phylum would be incompatible with the biology of another (9). How Kiritimatiellaeota fits into this picture is still unclear, but answers may lie in further investigating the relationship between its ecology,  genetics and architecture.

The dramatic ending of a mystery usually doesn’t include speculation and uncertainty, yet that may be the point. The Case of (bacterial) Identity is far from closed. And the classification of a new phylum opens many more cases, beyond this specific strain, about the origins and definitions of phylogenetic diversity, the ancient births of lineages, and how we approach studying the interconnected web of bacterial life.