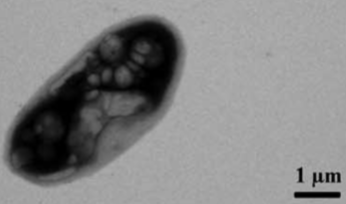 We are Alexa Boesel and Fred Cohan from Wesleyan University, and here is our next story for Invisible Life.

A few years ago, an exciting discovery was made in Badwater Basin, Death Valley. Under microscopes, Lefèvre and Bazylinski found bacterial cells that seemed to be swimming. Upon closer inspection, it became clear that the cells were in fact magnetic! Intracellular, magnetic, membrane-bound nanocrystals move bacterial cells along geomagnetic field lines.

So, where do these bacteria cells derive this magnetic super power?

It takes a very particular environment to create magnetism. The mineral greigite is created only in extremely reduced, sulfuric environments, where there is an abundance of iron and sulfur. In this anaerobic landscape, bacteria metabolize sulfate in the place of oxygen. Sulfate that is in solution is converted into iron sulfide crystals of greigite, creating intracellular, membrane-bound chains called magnetosomes. What originally appears to be a toxic environment in fact inspires an evolutionary change, creating fantastical magnetic properties.

Even more impressively, magnetotactic bacteria might revolutionize our medical technology. Greigite is hypothesized to have stronger magnetic properties than magnetite, another bacterially produced magnetic mineral, which is currently used in drug delivery and neuroimaging technologies. Imagine harnessing the power of Badwater Basin bacterial strains to more precisely medicate and image nervous systems!

Photos of magnetosomes and the Badwater bacterium BW-1, which produces magnetosomes of both greigite and magnetite, from Lefèvre et al. 2011. Science 334:1720. Used with permission from AAAS. Readers may view, browse, and/or download the photos for temporary copying purposes only, provided these uses are for noncommercial personal purposes. Except as provided by law, this material may not be further reproduced, distributed, transmitted, modified, adapted, performed, displayed, published, or sold in whole or in part, without prior written permission from the publisher.