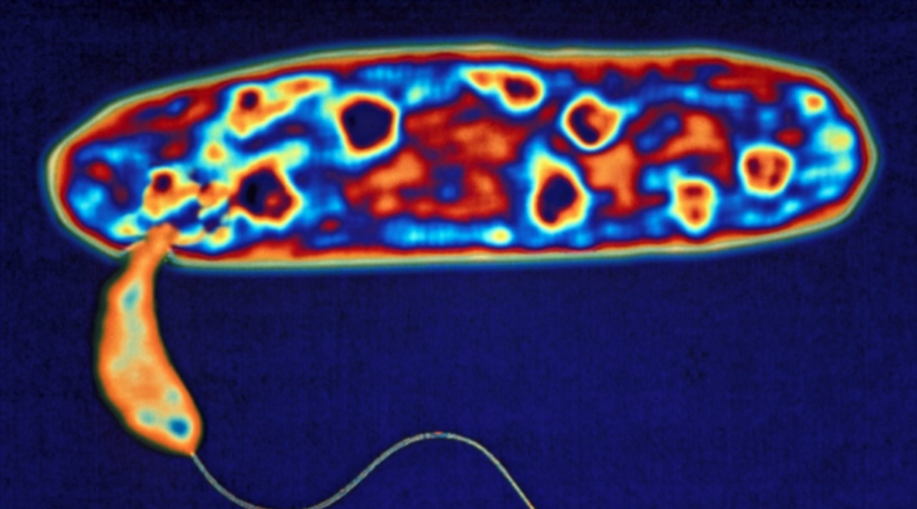 Have you ever wondered what bacteria eat? The answer to this question is as diverse as the bacterial kingdom itself. Bacterial species absorb nutrients from their surrounding environments. Many microbes that live in the ground get what they need to survive from organic molecules found in the soil, and the commensal bacteria that live in your gut ingest resources from the food that you eat yourself. Cyanobacteria can even create their own food sources from sunlight using photosynthesis, just like plants. Chemoautotrophs live in some of the most extreme environments, like deep sea vents, and can survive off of inorganic substances alone, such as sulfur or ammonia. But predatory bacteria get the nutrients they need by feasting on other bacteria.

Groups of cells in one species of predatory bacteria, Myxococcus xanthus, work together in packs to “hunt” other bacterial species. M. xanthus hunts in colonies of thousands of cells (colloquially referred to as “wolf packs”) that form a biofilm and move together to inhabit their prey’s territory and lyse (rupture) the prey cells in order to get the nutrients they need to survive. This spectacular phenomenon is shown in the video below.

Other species of predatory bacteria work individually to make use of their prey. Bdellovibrio bacteriovorus bacteria invade prey cells by burrowing a small hole in their outer membrane. B. bacteriovorus make a home in the space between their prey’s outer and inner membranes. There, they consume various elements from their prey, including proteins and nucleic acids. B. bacteriovorus grow and replicate inside their host cell for a number of days until the prey is lysed, releasing the original bacterial predator and its progeny so they can hunt again.

Micavibrio aeruginosavorus is another species of predatory bacteria that do not invade their prey, but attach themselves to the outside of a prey cell. From here, M. aeruginosavorus can leach nutrients from its victim (thus earning the nickname “vampire bacteria”), eventually causing the prey cell to die. 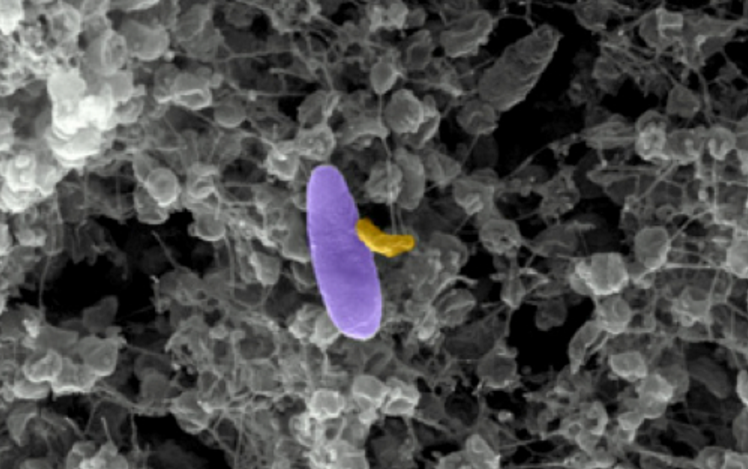 Because of their ability to debilitate a large variety of gram-negative bacteria, both B. bacteriovorus and M. aeruginosavorus have been suggested as an alternative to modern day antibiotics. A number of pathogens circulating in humans today, especially those that spread in hospitals, are resistant to at least one, often many, and sometimes nearly all, of the antibiotic drugs we have. Today, the evolution of drug-resistance in bacteria outpaces the discovery of new antibiotics. This has created the need for alternative ways of fighting bacterial infections.

A study published in 2013 demonstrated that B. bacteriovorus and/or M. aeruginosavorus are capable of killing gram-negative bacteria that cause illnesses including pneumonia, certain opportunistic infections, and food poisoning, even if they are resistant to multiple antibiotic drugs.

Because it is difficult to predict the consequences of these predatory bacteria on all of the bacteria that live in the human body (especially the gut), it has been suggested that this form of treatment be mainly considered for topical uses. Another 2013 paper studied the potential efficacy of these bacteria to fight eye infections. It found that B. bacteriovorus and M. aeruginosavorus are capable of killing eye pathogens, and furthermore, that they have no effect on human eye cell cultures.

Another risk to public health is not just the natural evolution of multidrug-resistant bacteria in hospitals, but also the construction of them as a means of bioterrorism. If a community was attacked with a strain of bacteria that was designed to be resistant to all known drugs, these predatory bacteria may be able to stop mass death. With an ever-increasing fear of terrorism throughout the globe, a paper released this past December by doctors at Rutgers University examines the merit of using B. bacteriovorus and M. aeruginosavorus to combat a bioterrorism attempt using a number of gram-negative pathogens.

The study assessed the ability of these predatory bacteria to kill Yersinia pestis, Burkholderia mallei, Burkholderia pseudomallie, and Brucella melitensis. These bacteria are responsible for causing Plague, Glanders, Melioidosis, and Brucellosis respectively. Plague is normally carried by fleas, and the latter three diseases affect primarily people in close proximity to domesticated farm animals. These pathogens can also be spread via aerosols however, making them prime candidates for bioterrorism. The Rutgers study found that predatory bacteria are capable of killing the pathogens that cause both Plague and Glanders, but are not able to disable the pathogens that cause Melioidosis and Brucellosis. Furthermore, these bacteria are able to lyse only gram-negative bacteria, and would not be effective against a number of other suspects for bioterrorism. Bacillus anthracis (the culprit of anthrax), for example, is a gram-positive bacterium and would not be susceptible to B. bacteriovorus or M. aeruginosavorus.

Predatory bacteria may not be the ideal alternative to antibiotics, as they could have unknown effects on the helpful microbes in the body, and are effective only against some gram-negative pathogens. Nonetheless, predatory bacteria could have the ability to take down multidrug-resistant pathogens (whether manufactured accidentally or by terrorists) that we have no other defenses against. They could also be a useful tool in fighting topical and ocular infections. Predatory bacteria are not only unique in their ability to prey on other bacteria for nutrients, but could have important biomedical and national security functions.