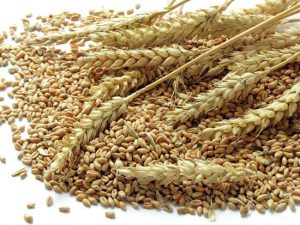 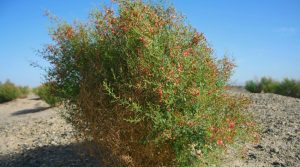 What is the connection between the recent conflict in Syria and a new scientific study involving bacteria that promote plant health? Two words: climate change. According to a New York Times article by Henry Fountain, Syria experienced an extreme drought from 2006-2009 that was most likely due to climate change. The drought resulted in crop failures and a migration of some 1.5 million people from rural to urban areas. This in turn was a contributing factor to social unrest that eventually resulted in a full scale uprising against President Bashar al-Assad.

Scientists predict that as climate change intensifies, we will experience more frequent, severe, and long-lasting heat waves around the globe. In already-dry regions, there are likely to be more frequent, severe, and long-lasting droughts. Such developments are detrimental to crops and could result in mass food insecurity, particularly if the global population continues to grow. Food insecurity, as we have seen in Syria, has the potential to result in political conflict. But perhaps there is a way to defend crops against increasingly hostile climatic conditions…

In a recent study Chaoqiong Chen and colleagues describe a novel strain of plant growth promoting (PGP) bacteria (proposed name Pantoea alhagi), which was able to successfully colonize wheat. PGP bacteria are so named because they can increase a plant’s resistance to abiotic stressors such as drought, cold, salinity, and heavy metal toxicity, as well as to disease. Pantoea alhagi was discovered originally living within the leaves of Alhagi sparsifolia, a drought tolerant plant native to Northwestern China. When Pantoea alhagi was experimentally introduced to wheat plants, it was found to improve plant growth and drought tolerance.

Samples of A. sparsifolia were collected from Taklamakan Desert in Northwestern China. Several communities of endophytic bacteria (bacteria that can colonize the internal tissues of plants) were isolated, including a novel strain. Based on phylogenetic analysis, the scientists concluded that the novel strain, designated LTYR-11ZT, should be assigned to the genus Pantoea (class: Gammaproteobacteria).

Upon in vitro testing, LTYR-11ZT exhibited multiple PGP traits and abiotic stress tolerance capabilities such as mineral phosphate solubilization, siderophores, and tolerance to osmotic stress, salt and high temperature. (Mineral phosphate solubilizers help the plant obtain phosphorous and siderophores do the same for iron– both essential nutrients for plant growth).

Moreover, an adhesion assay proved that this strain was able to efficiently colonize the rhizoplane of wheat roots.

Next, pot experiments using wheat were performed to determine whether or not LTYR-11ZT improves plant growth and drought tolerance. Under normal conditions, plants inoculated with LTYR-11ZT developed normally and were healthy, and moreover, the plants displayed significant increases in root length and fresh weight. After 7 days of water deprivation, (i.e. simulated drought) inoculated plants were less prone to wilting and demonstrated increases in shoot length, root length, and total plant fresh weight compared to non-inoculated plants.

One of the most striking things about this experiment is just how different wheat and Alhagi sparsifolia are. As far as flowering plants go, wheat and A. Sparsifolia are about as distant as you can get– wheat is part of a class called monocotyledons while A. Sparsifolia is belongs to the class of dicotyledons. The fact that this PGP bacterium can live on such differing hosts is a hopeful sign. It suggests that certain PGP bacteria may be widely applied to diverse species of plants, in order to increase drought tolerance on a large scale.

If PGP bacteria such as Pantoea alhagi were to be introduced to crops on a commercial scale, perhaps a good deal of food stress and political strife could be averted. Moreover, PGP bacteria have several advantages over other methods of protecting crops from drought, disease, pests and other threats posed by climate change. For example, the public has been increasingly resistant to the prospect of genetically modified crops, and pesticides/herbicides have long been regarded as a health risk and a source of environmental damage. PGP bacteria may provide an alternative.

But are there any barriers to widespread PGP use? Arora et. al have identified several barriers including the high cost of production, storage difficulties, and inconsistent performance of bacteria in the field. Like any new technology, PGP bacterial inoculation will most likely undergo a rocky period of transition and testing before it is fully accepted. That does not, however, mean that it isn’t worth a try.