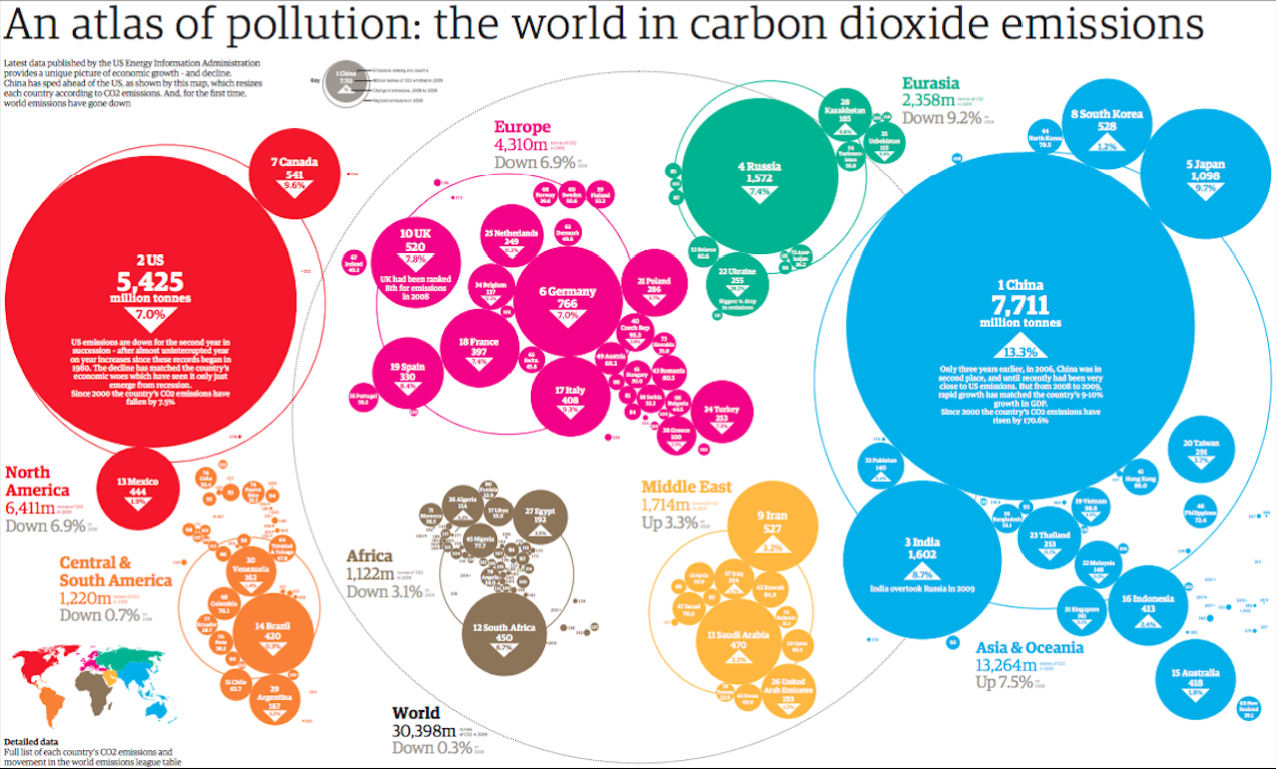 Climate change has and will have numerous effects on human health. Increased temperature and UV radiation will increase the rate of skin cancer. Rising temperatures, increased atmospheric CO2, and increased ozone concentrations at ground level will intensify the severity of allergies and asthma attacks. Flooding will result in drinking water being contaminated with toxins and algal blooms. Droughts will give rise to fires as well as food shortages that can even spark wars. Not to mention the mental health effects that many communities are already facing as a result of the trauma that climate change induces. If you don’t know someone whose health has already been weakened by climate change, there’s no doubt you will in the coming decades.

Another health consequence of climate change is a shift in infectious disease distribution and intensity. Climate change is believed to affect a multitude of diseases including those caused by both viruses and bacteria, and those that are transmitted by air, food, water, and vector animals (such as fleas, ticks and mosquitoes). Climatic variables such as temperature and precipitation can change the ecology of certain microbes by changing the time and length of their infectious season, and can affect the distribution of disease vectors and introduce infectious diseases to new areas. Diseases that are expected to intensify due to effects of global warming include some of the nastiest and most prevalent bugs in history such as cholera, malaria, Lyme disease, plague, salmonella, and – the main focus of this article – dengue.

Mosquitoes (through the pathogens they carry) kill more people per year than any other animal. Vector-borne infectious diseases are one of the leading causes of death in much of the developing world. The dengue pathogen is a type of flavivirus (the viral family that also includes West Nile virus and yellow fever). Dengue is transmitted to humans via either of two mosquito vectors, Aedes aegypti or Aedes albopictus, and it is the most common vector-borne disease worldwide.

To have an outbreak of dengue, three components are necessary: the pathogen (dengue virus), the vector (A. aegypti or A. albopictus mosquito), and the host (humans or rarely, another primate). Symptoms of dengue fever are usually flu-like and non-fatal, but can develop into severe dengue, which has a mortality rate of 1-2.5% if treated, and over 20% if left untreated. Most people who die from a dengue infection are children and those who lack basic health care. There is no vaccine or treatment for dengue beyond management of symptoms, so the best way to prevent or control dengue outbreaks is vector control.

The mosquitoes that carry dengue are greatly affected by environmental variables though, possibly making vector control a bit more complicated as the climate changes. Larvae of the Aedes genus cannot survive in freezing temperatures, so dengue is characteristically limited to tropical and subtropical climates. The expansion of tropical ecosystems due to global warming, however, will increase the area in which dengue vectors can live, thus greatly impacting the number of people at risk of contracting tropical diseases such as dengue. As of March 2014, approximately 2.5 billion people (about 40% of the human population) are at risk of contracting dengue based on the current ecology of the disease. However, by 2085, five to six billion people will be at risk (50-60% of the future world population). This increase in the at-risk population will be due to the ability of Aedes vectors to move to more northern and higher altitude locations that will experience fewer freezing nights than they have in the past as a cause of global warming. Within this century, much of the United States will be included in this at-risk area of dengue transmission, possibly even places as far north as New York City. 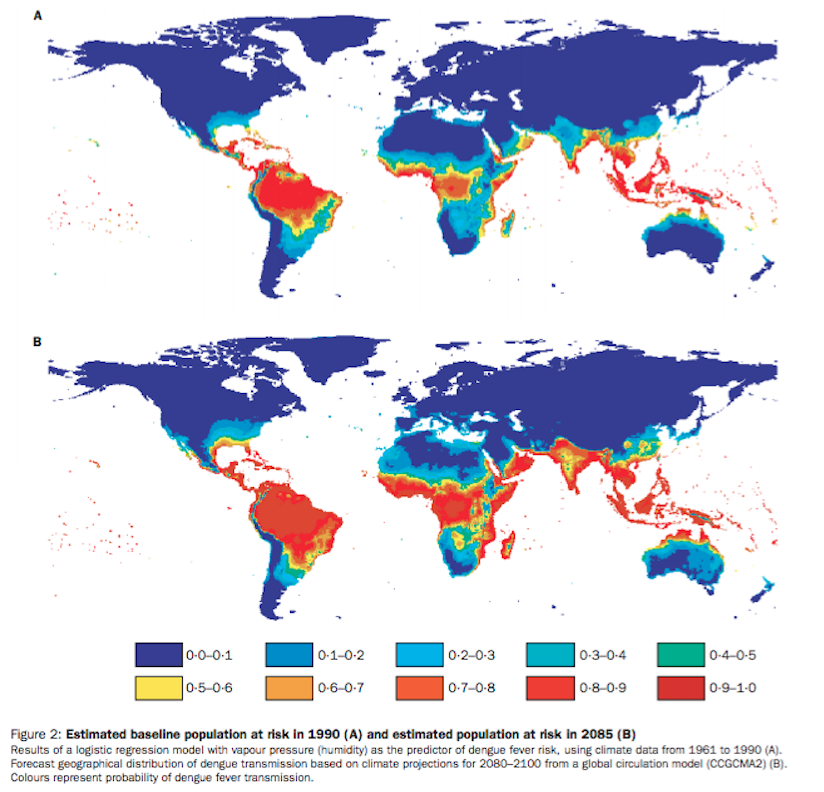 An additional 1.5-2.5 billion people will be at risk of contracting dengue in 2085 due to side effects of climate change (image from Hale et al, 2002).

Climate change can intensify dengue transmission in many ways besides increasing its area of impact. Warming temperatures improve mosquito survival in general and also cause female mosquitoes (the only ones who actually feed on blood) to bite more often. Furthermore, it has been shown that high temperatures can lower the incubation period of the actual dengue virus in mosquitoes (the time between a mosquito biting an infected individual and being able to disperse the disease to more people). This allows mosquitoes carrying the virus to be able to infect humans for more of their lifespans.

Increased rainfall, as is expected in many areas because of climate change, can also increase mosquito breeding grounds and proliferation. Mosquitoes thrive in warm, wet areas, and more precipitation can lead to more open reservoirs of ground water in which mosquitoes can make their homes. Any time there is an increased population of A. aegypti or A. albopictus mosquitoes, the likelihood of a dengue outbreak increases. For this reason dengue outbreaks are also more common after natural disasters, which the International Panel on Climate Change reports are likely to become more severe as a result of climate change. When property and infrastructure are destroyed in natural disasters, the opportunity for mosquitoes to breed and come in contact with people is increased (picture the torn down houses alongside the intense flooding caused by events such as Hurricane Katrina that could leave people extremely vulnerable to increased swarms of mosquitoes).

All of these factors will contribute to dengue outbreaks being more frequent and severe in response to a warming world.

The effects of climate change on dengue ecology will be seen over much of the world, but the consequences will differ for various affected communities. Dengue fever currently affects poor people and people of color disproportionately compared to the rest of the population. This can be partially attributed to the fact that the virus thrives in warm, tropical climates where many of the world’s poorest nations happen to be.

However, even in places with the exact same climate, dengue rates can vary significantly by country or community. For instance, Brownsville, Texas and Matamoros, Tamaulipas lie adjacent to each other on opposite sides of the U.S./Mexico border. However, during a 2005 outbreak in the area, the dengue rate was eight times greater in Matamoros than Brownsville (32% and 4% respectively). Furthermore, Brownsville residents were much more likely to contract dengue if they were born outside the United States or had low incomes. Another example of dengue discrimination is in São Paulo, Brazil, where dengue incidence doubled between individuals of low deprivation and high deprivation communities in a 2007 outbreak.

Disadvantaged communities face an increased risk of dengue infections because of the specific risk factors associated with the disease as well as reduced access to medical care. Factors such as overcrowding, lack of air conditioning and window screens, spending much of the day outdoors, and reduced access to insect repellent are social aspects that increase a community’s risk of a dengue outbreak, as well as an individual’s risk of contracting the virus during an outbreak. Low access to these resources in poor and minority communities are social elements that affect the ecology of dengue transmission and stimulate, often deadly, outbreaks.

The unequal distribution of dengue infections throughout the world can be attributed to wealth and social status, which are significant factors in human and disease ecology and geography. Social determinants play a large role in dengue illnesses, and will likely continue to do so in the future if nothing is done to address the issue.

Intensification of dengue transmission, however, is just one of many health consequences of climate change that is already affecting resource-poor minority communities at disproportional rates to privileged ones. Climate change is the result of greenhouse gas emissions, mostly from wealthy developed countries. The increased burden of dengue illness in vulnerable communities due to climate change can thus be thought of as a form of what Paul Farmer describes as structural violence, or an act that is “embedded in the political and economic organization of our social world… [that] causes injury to people (typically, not those responsible for perpetuating such inequalities).” Pope Francis has also recently voiced a similar opinion in his Encyclical on Climate Change and Inequality where he calls for action against climate change as a means of protecting the world’s poorest and most vulnerable individuals. In order to prevent and reduce dengue transmission both in underprivileged communities (many of which have very little contribution to climate change), and worldwide (possibly including your own backyard), wealthy developed nations must take actions to change societal norms and reduce harmful emissions.