We are Alexa Boesel, Oliver Goodman, and Fred Cohan from Wesleyan University, and here is our next story for Invisible Life!

These are exhilarating days for the discovery of bacterial diversity, much like an earlier golden age of biological discovery two centuries ago. In the early 1800’s, European naturalists traveled the globe in search of unknown creatures, while today, we are finding even more wildly foreign species! The earlier explorers found animals and plants that had never before been seen by western scientists, but many of these creatures were regularly observed by other humans and even had local names. The Europeans were just the first to create scientific records of them! Moreover, many of the exotic creatures were living in habitats similar to those already known, and explorers were simply finding new organisms performing old tricks. For example, Charles Darwin found finches on the Galapagos Islands that ate the normal finch diet of seeds, but he also found strange finches with unfinchlike diets of insects and fruits, foods consumed elsewhere by birds such as warblers, woodpeckers, and toucans. In contrast, today’s explorers of microbial diversity are discovering extreme conditions in which life can succeed, often teeming with organisms that are utterly disparate from any known creature.

Fred and his colleagues Rob Dungan and Jong-Shik Kim, along with their students, were interested in exploring the bacterial diversity in the extreme habitat underlying the salt crust near Badwater. Were there any creatures never before seen by science? Rob carefully scraped away the surface evaporite layer (containing the salt crystals), and sampled the underlying wet sediment which, unsurprisingly, was extremely salty. 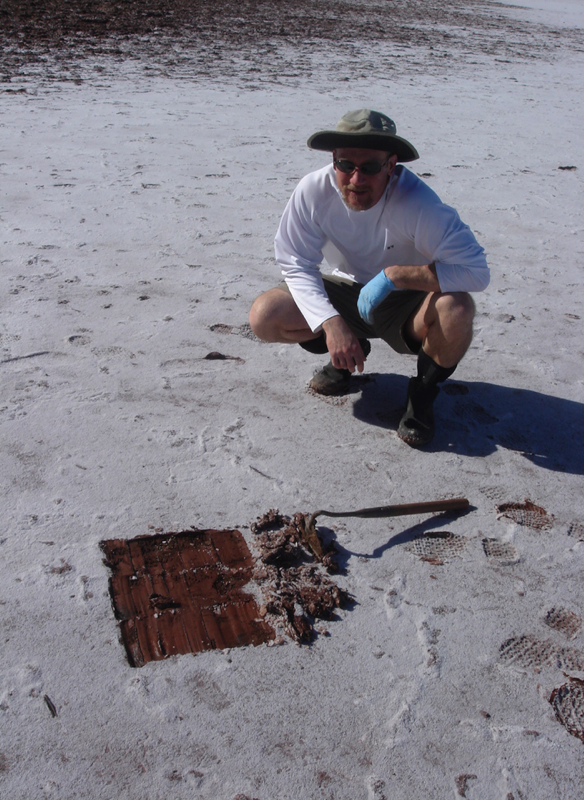 Since only a small fraction of a bacterial community’s diversity is readily cultivable in the lab, scientists need to characterize a community’s inhabitants without the benefit of growing the organisms. So, Jong-Shik and his group extracted DNA from the community samples and obtained DNA sequences of a particular gene (called 16SrRNA, and shared by all cellular life). When comparing the DNA sequences to all known sequences, we found that we had discovered many new species, as well as a half-dozen new genera! (“Genera” is the plural of genus.) What does it mean to discover a new genus? It would be like scientists had never noticed that there were oak trees in our forests (the 600 species of oaks comprise the genus Quercus), and all of a sudden the oaks that had been invisible to us became apparent. How will the new bacterial genera contribute to their saline environment?

Cultivation-free approaches based on DNA sequencing have led to discovery of bacterial groups that are vastly different from any cultivated organism—beyond new genera, microbiologists are finding new families, new classes, and even new phyla (the most grossly disparate groups of bacteria). Since scientists began using cultivation-free approaches to discover bacteria 25 years ago, there has been no slow-down in the rate of discovery. There is so much more to be discovered and so many more extreme ecosystems to be explored!